Like grapes, it peels my eyes.
It's no time to shine a light on.

They say radiation splinters t' kill,
That death is a smoothing guiding.

But here is what the night's been unable to heal:
an accumulation of daytime crusades n' missions.

Grant me one more hour behind the screen,
No inconsequential might from worlds away.

When my features have realigned
, it will be time to hunt and forage. 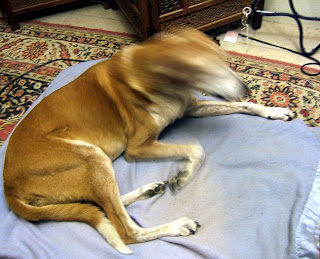 Spittle forming on his lips, Mike feverishly tries to force his sturdy plastic tubing neon-look Mordon holy star, with its loose and twisted cabling, into a cardboard box. ERUSOLCEROF FO GNIRFFO is spelled in backwards letters on the translucent paper sign taped to the picture window behind him. The points of the star are making every angle impossible. Finally he whips the star back out of the box, hitting himself on the forehead with the plug, drop kicks the box into the fireplace and storms down a long hall to the sliding glass back door and further down wide stone steps and onto a cement patio from which he discus-hurls the star into a low puddle of yellow foam at the bottom of the pool. As it flies, it resembles a spiky brain and spinal cord set free.

Doorbell rings. Mike, wearing nothing but a denim shop apron and flip-flops, hears the chime from a backyard loudspeaker deep within a nest of scarlet bougainvillea. He drops the pool robot, whose tank treads are already turning eagerly, into murky water. He geishas up the stone steps and the long hall and to the front door, near which a glowing blue Mordon star can be detected from behind the living room sheers. The open door frame reveals a middle-aged couple smiling quizzically.

Hello. We noticed your star. Are... you a Mordon family, and if so, what are you doing for No-Shiv? Hmm, we are the leaders of the Mordon community in the chank, and I have a red box gathering every year at our home-- it's a Chalk tradition. That's Dick, and I'm Embhra.

Dick, Embhra; Mike. Well, I'm not a family, or-- we're not a traditional family. By the way I am one-sixteenth Mordon, and on the mother's side, but I am Shiv, brought up Shiv. Uhm, for many reasons, including the obvious need for diversity in Chalk Chank, I decided to show respect for the other part of my heritage this year. When I say we're not a traditional family, me and the folks that tend to live in this house, I mean there is no legal contract, and we are of mixed and questionable gender. I'd love to come!

Her father was not Satan 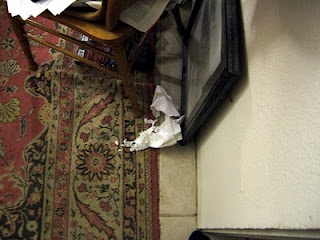 Jan tries to convince a panel that her father was not Satan:

Anyone with a key to the mill is suspect, first of all. There's work to be done there; you can't make a watch list of everyone that leaves a fingerprint knowing the beast doesn't prolly even have one, do you know? And it's not because I wd be the Daughter, assholes. Whut wd that mean, anyway? Spawn of the devil indicates... are you good bad neutral. That's not been nailed down. A demon wd hang around and try to assimilate someone willfully or situationally ignorant, don't you think? OK I'm evil and I'm going to wear you because you are a sensitive searching self tortured hotty of a mess? I mean even after his cuticles became rotted with nail fungus Daad was irresistibly naive and focused on traditional virtue as a hair shirt, tio. OK, so I can speak the language of the Inquisition, and that was handed down to me by some sort of gothic nazi antihero that fits the cascading style sheet of the gift shop down at yr local lyric-opera joss house?

We're in a ditch, bottom of a moat that curls part way round a moun'n and sucks wind in from the ocean. Relief filter graphics show how a storm's plasm turns from maroon to turquoise as it pushes across Mthyuh's peak. A pink thunderhead in a sheet reaches in from the shores and up through the pass just skirting the lower chanks and back again to rejoin its northerly impulse. It's raining noisily. Feral pups squat with their ears back on rocky hillsides and search for their mothers along washes in the lightning flashes.

Peg appears sopping wet in some kind of buffalo fur hotpants and bra. She scoops the wayward babies into the fossil of a pelican bill, but giant, and drags them off in their hope boat of bone by rope to a distant glowing cave.

ladies, when you took my boyfriends, I told other women.
gentlemen, i saw whut you did too, but why so violent?
here we must all swing from pole to pole, but so much friction?

like an embattled civil servant, i skulked through the lunchroom.
can't sell my tics, my shiv's a pacifier, can't get my mind around it.
where was all the love i knew with mike and ken and stu and...

here in prison, they say it's *a* hard life when really it's a whole
hard life, longer than most flakes could ever notice, and then,
they say, in retrospect it won't have been that long in the next life.

i'm sorry you stopped buying my tics, but a woman has to hedge herself,
and sometimes it's shrill as a scream. it wasn't like i was running a
racket. you only become a prison snitch when all hope has soured.

Jan wanted to adopt the ugly child who had been spying on them from under a truck. Wayne said ok if they could take her brother too, a baby covered in scars. Reptily explained that the tot in its wooden crib was really her uncle, who had been 27 only a few days earlier, before leaping from a cliff-side prayer station into Mthyuh's roiling gut.

"He's a re-baby."
"I can guide his nature."
"She could be beautiful as a topless aframerican in her 30's."
"There's something in yr daddy's lab we can use to cure those scales."

The expectant couple had to step back through the crack tho to find the chillen. There were hunnerds of years of folds and recriminations. Jan and Wayne were not afraid because the momentum of their luck in meeting had brought them safely to righteous lives and prolly forced the muscles of time into a gaping laxity.
by cap'm at 2:34 AM 0 comments

the last time i came was with you

the last time i came with you
was a vacation from being a gender puppet
; you went ahead and acted subservient.

the last time we came it came unglued:
our construction of an oppressor's paradigm
, the wasted thoughts we paid for admission

The worshipers have cleared out my home, split up the bitches. One of them, I hear, is fed on canned corned-beef hash and Hawaiian bread. If it's La-La, she could get bloat.

The pool torches, the Yukio Mishima collection, all gone. My pants suits, stethoscopes. Do you know why I'm not bothered by your pictographs in flames?

As long as they burn here, for me, they are good to no one else. Your hand on my breast was spit-blown with oxblood all around like a dissolving turkey star.

No rent to pay, no dishes to cull. I am on cement detail for a long career. The pulsing glow of my ankle bracelet is your good eye, the one that only looks this way.

I take my moles wherever I go. They were needled into me by heaven. All my attempts to extend into space from my torso, however far, have sprung me back to a single cell.
by cap'm at 3:52 AM 0 comments

Reptily loves telling stories of her childhood in the human meat bazaars. One endearing slave's Johnson was so large he would be ordered routinely to hold it still. It held metaphornical value as a coat rack, a radiator, a spritzer bottle. By way of salutation, you'd jive, "Just don't move, daddy!" in place of [his name] or ciao. For fear of insurrection or other friction, it was gathered to be the phrase Wayne wd encounter most often. Just as cruel were the simultaneous demands for hot verbalization. Two central desires, to act and be wordless, were denied him during moments of nature's most strenuous command. This was Wayne's work and Wayne's sacrifice. Bereft of options either for civil disobedience or employment, he wd oblige the temple-step tithe monitors to collect their coins by shameful finger from deep inside his snakeskin lucre sash.

Reptily was watching with blackened eye, from bed of filthy rag, beneath a corn hooptie when Wayne finally met his ticket to the middle chanks, a kidnapped preachers' kid from Fordamall. Jan's bare-shouldered, curly-shod traffickers were scraping her encumbrance along a pinched and moldring callejón, high on a mirrored pillow. Her veil branks was fine as wisps of smoke out the nostrils; wrought-iron finch seemed to dash for liberty from the fancy, cage-like dental installation; her head was razored to crushed velvet pile. He bought her where she sat. Without hesitation, for a five-teated cull nanny and a few ribald shouts, Wayne set Jan free. Jan took Wayne home. Jan's dad bought Wayne. Now Wayne just moans. Jan can now see. Wayne is on top. Jan says, "Don't stop..."
by cap'm at 12:39 AM 0 comments

I've been a wandering fool, and it was amazing.
Popping up though gravel like a science film--
what if every frame were an entire short life?
Somehow Shab and my cart are always waiting
; so whut is my purpose circling through here?
Both my eyes are featured too low in the face.
What's next? Skin over mouth and cheek lips?
Every rebirth takes a toll on yr body cosmetics.
I keep passing through I guess because I jump
over and over into Mthyuh. On this entire mo-
untain in fact every expiration is rewarded in
a stinging revisualization of all that was sacred.
by cap'm at 7:40 AM 0 comments

At least then I'll be in a no-bind cell. They have bed linens and sinks. We can produce eye-shadow and tattoos.

Public values have been my ball and chain of all the avenues the polls could have taken.

But the old system, a skeleton, is my Public Home. Every iron bar a month's living rent.

Why so many zombies? Our answer lies in the widespread fear of zombieism.

You sit in the Killercoaster, tilt with the wurl. Do you dare take a sideways glance at the guy at the tip of yr axis?

Remote Tissue Decisioning needs to stop here, in this momentous space we share.

Remote Muscular Positioning seems too painful to resist. What if the operators were dead? What if a million zombies could be cured by taking a shotgun to the cameraman instead?

If everyone took a snip at the Filter of Loathing, in just an evening we could be back asleep with no one knowing. Our intimate blister would again be a universe without a crack.