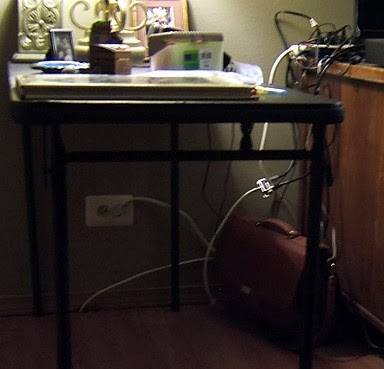 When Letha wed a farmer aphid who tapped and bled her chi,
Hooked by the tender feeling hairs on her wrists to his wiry mesh,
My long career would finally end a constant homing back to me,
For a hero's arc, the way a whale shark blocks green the deep from sun,
A murky shade where only the good can see a blackguard run.

Now in this dusty corner lists, strewn with cables that fed a desk,
A pathetic briefcase kneeling on its own tanned flesh like a routed bum:
The number-coded clasp, always set for triple six, but by mistake;
The single stitch intact to cinch a handle, the yoke of a shoulder strap,
Drift blank as in a fog against the wall, not taking note of it at all.

Letha was born when the whole arctic cracked open, broke its water on the heartland
She skidded onto a rock with the waste of a crystalline breath settling in the trees
We found ways to keep her warm enough to breath tied between pack asses and sheep
when the heat of any one walking human body was not enough to support and sustain a baby.

We kept moving in the direction the grizzled elders read somehow seizing hungry in their sleep
When there was a conflict of opinion we chose the one whose eyes expressed the lesser horror
The lights at night were games to taunt the fools who prayed for riches from the colors
We ate the ones sliding toward us from the opposite hills sitting stiff in their leather toboggans.

The saran-wrapped salmon fillets at the top left of the heap were starting to turn soft and too dark a pink and I figured out that the whole opposite wall of the compartment was standing propped open, a feature that I was not even aware existed, but it concerned me more that someone other than myself had left it that way after helping themselves to my freezer and/or its contents. Upon further investigation it became apparent that the contraption had a number of other doors, almost like a snack truck. You could access it from any angle, brace open the various padded aluminum panels and even step inside, where there was a place to sit and a desk with some paper and pens scattered on a smooth, cool writing surface.

A clever looking woman was helping to point all this out just by following me with her eyes and the occasional directional gesture or fragmentary comment. She was down there in the basement, a marvel of cement beams and cantilevers and stairways and the type of square window panes in large sets you'd find in a warehouse hanging out over a river or one of the abandoned laundries at Alcatraz. The woman seemed to be not only clever but also very nonchalant about what she was doing in my apartment, which had become more like an impromptu immigration slum or silent squatters' co-op in a rusting high-rise construction project. Her hair was plain and straight but fashionable; her shift and flats clung to her like a ballerina's.

I had given up on the salmon fillets and begun to wonder where was all my furniture. Around back of the fridge was my front door and I started banging on it to find out who now lived there. A swarthy, mole-covered man lounged on some nearby steps with his knees spread, creating a slow shower of nut shells, some sort of loafered Romani pimp. I guessed he was in charge of assessing and collecting rent, and yet that he too had knowledge which could help to resolve my disorientation. He didn't protest as I pounded on my door, now a thick, deeply beveled salvage item from a ruined block of the formidable row houses you might find on one of those gracefully curved boulevards in London, a street you might assume continued on well kempt forever because of the humane manner in which it limited your vision.

After a very short spasm of unnecessarily dramatic thumping and shouting, another woman, less clever looking, opened the door. She seemed frightened less of me than by her humble situation in the space that'd once been occupied by my home, my belongings. I launched upon a speech which invited her to explain the plausibility of my entire living room, cataloging its contents, being carted off and replaced by her shabby and unfamiliar odds and ends which seemed to have been dragged to the site in haste overnight and left to sit and be bounced upon by kids without regard to either logic or aesthetics. She had her own problems without trying to recount how she and her entire single-mothered family had displaced me during the few moments between that one and the one in which I had decided to look and see what was around for dinner.

The clever woman had been busy folding and shuttling her ironing from one odd-angled cement alcove to the next in her arms or on a squeaky chipped and dented cafeteria cart. I suppose it was on her suggestion that I rocketed off to an open-air market in the clouds where, at the end of such a miraculous journey, no one seemed any more enlightened or concerned but for the everyday drudgery and meager satisfactions of life than they had been in the bare cold bowels, the modernist tenement, of what had become of my former life. I approached the very first pair of vendor ladies, resigned and sedate, their hair pinned up in back and casually scarved and ready for a day's business. I explained my situation a little more calmly now, already becoming lulled by rhythms of normalcy in a milieu of the strange. They both knew right away what I was trying to describe: my things, my place to live being stolen or having simply dissolved and reconstituted as someone else's just behind my back or in the visual periphery. The larger figure, in a colorful flower-print house frock and sensible robin's egg muslin apron motioned toward the woman next to her, a shriveled and perhaps later, happier but sclerotic, more tragic version of the clever dancer I had encountered earlier. The latter nodded politely and pulled open a light, wide drawer which had until then been hidden behind the polyester lace that shrouded their folding table along this avenue of tables where scavengers wandered up and back purchasing skeleton keys and weather vanes and pitted crystal balls on cheap plastic tripods.

The shallow drawer appeared to have been designed for baby linens or lingerie; the vendor, with all her dark and frail confidence, lifted out an embroidered sanguine cloth the consistency of a chamois, maybe with some added beading or faux-rhinestone applique. Her eyes, in their way, and with the help of her stronger and saucier colleague, explained that someone must have spread a similar square of decorative fabric over my head, perhaps while I was sleeping, causing my environment to be disappeared, to stubbornly recomposite itself, and that all I could do now was to purchase and to wear this corresponding instrument. A magic cloth.

In contrast to the long-obsolescent and weakly assembled scraps of 21st-Century ephemera the contemporaneous population had to work with for the plying of their trades and to stitch together a typical day, the mode of transportation back to the surface of our mother planet had evolved beyond my wildest dreams, and so punctual! Akin to the shape of a subway car, yet with a hydraulic door of the size you'd expect on an airline hangar, my coach, or what I could spy from beneath the rag, roared to the fore. I stepped in not in trust but neither in alarm because I would live to see what tomorrow would bring, even if with no more protection than a sham of a covering, a caul of surrender, a shrug of easy belief in the crap you can run across at a flea market when you've nothing to lose and the true riches of the world are being hoarded irretrievably by the future.
by cap'm at 10:38 AM 0 comments 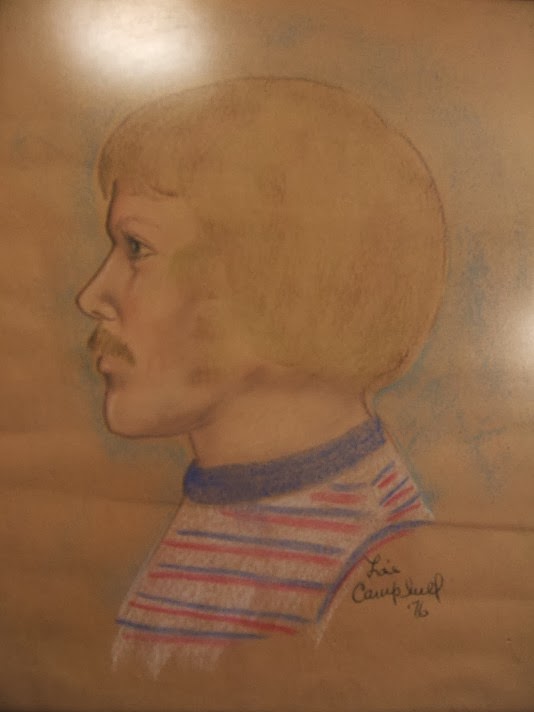 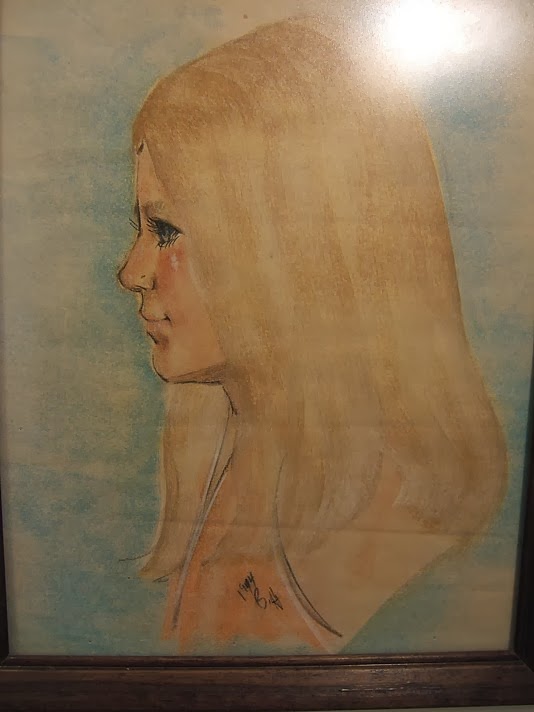 Pinpricks across the county smoldered by way of wide-stepping colossus,
Average heathers and jims had to shoulder the debilitating explanations;
Widower parked at the laundromat complains she ding-ed up the bondo,
Should've tipped twice again the charge of her job on his fender-less ride.

Maybe her space heater burnt down the stands at the track after shoeing all season,
Fifth-wheel gone as in religious pursuit of the anonymity manifest in self-profiling:
The corset tube and patched raiments, cauldron of highway-killed stew meats,
Roses and twenty fingers in your pockets before you can say I don't want it.

That kind of smoke makes you a hoarse that's tied to manners of voluntary geld,
The acknowledgement of a truer husband by which she too's held in quiet mesmry.
A stiff lock of curl in your face begs the questioning of your own black fiber;
Gypsy leaves a fire smudge where she's seen entropy on those behind her.