this desmadre has been deactivated by the Mthyuh Preservation Society
by cap'm at 1:28 AM 0 comments

Tom was walking down a wide empty Dhubbabera windy boulevard, his pants flapping. It was disorienting not to have to go anywhere in particular except what one had planned out for oneself, and that type was the most breakable of oaths.

So his thoughts took over. Only when he forced himself to admire the towering desert chank, blurred with a haze of spring olive verdance, did he feel that he existed as himself in that place, and in any case, that was not a pleasant thing. His mind operated as a spring this way, snapping back almost audibly after an intensive moment of pessimistic concentration before the sharply pending withdrawal. A whip. You wouldn't always want to be the object of that studied, cringing fronting off with reality.

So when a young German widow, furtive, herself disoriented, chilled by the wind in the shadow of the warm green mountain, blurted out, "Are you familiar here?" he saw the look of fright on her face and didn't want to be the cause of something like that, so he deliberately brightened up his mood, from within, allowing her innocence and vulnerability to spur on a sympathetic view of life, a view of life's delicateness, which ended up showing in his face and reassuring her.

It's back that way, he pointed. See the golden building? She'd asked him for the casino.

Then his walk continued and he did not snap immediately back into internal patter. He was crossing the shadow line on the sidewalk. Wind seemed to buffet him from all directions. There was brightness and bright color, magenta blue pink green yellow blossoms and their fragrance. As water sprang into his eyes stingingly, he imagined all of the dead who loved him standing in chorus and encouragement. But also in envy.

He felt responsible to use all of his senses, just for their sake, for a few moments longer.
by cap'm at 12:38 PM 0 comments

Peggy, You are our Daughter

You are our daughter. We've been wanting to tell you for so long. We are your birth parents and we love you. We want to help you with the girls and be their grandparents.

Down the entire contents of this box NOW!

2: In Search of a Paradigm 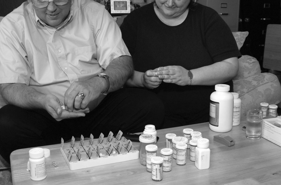 If they were all the same price, what did it matter?

IX. Truckon ROL.
i-proli havia. You read the Have You Experienced? pages in the paper daily. Most symptoms of most paradigms sound familiar, and you are on three or more rest-o-life doses daily. This is not a disorder. You may continue on with your life as normal, and your prognosis is positive. Why be a loser? You may expand over the years, through self-discovery, your daily regimen of wonders.

MMXLCCIX. Speed.
hunger. Remember when chicks worried about their weight just went ahead and got scripts for Black Beauties and Preludant? Fuck yeah they rocked. They like a talkie all night, makeup, stocked up on supplies. Speed freak chicks just want to hang and rag, maybe sixteen hours at a time.

CCCVII. Solids Plus.
superficiality. It's a way into deepness. The whole metrosexual thing. But not like South Park did it. More of an antidepressant. Real, physical things and how they are is real and present. You can grasp on to solids, and after all, you are one. Your premier lifewonder for today's premium rewards of your prime. Live a little. It's decadent, which means highly satisfactory.

VI. Nest.
cohesia. You believe there to be links of causality and intention between disparate entities. There is a pattern forming: of events, behavior which seem to share a purpose, though any number of motivations and consequences could be, with some effort, applied to each individual occurrence. Hanging in space, however, they would still create a shape. You are not a star. Keep it real. Nest is your ticket to everyday living.

They were at Ted's working on their letter-writing campaign. They felt that the Audubon Society, among many others, should know about the creature they'd been glimpsing hopping from gate to gate or just standing dumbly alongside the canals. It shared many of the characteristics of the Reddish Egret, except that those areas which would have been covered with feathers, and in the same colors, seemed to be tiled or even armored in a very hearty as well as irridescent, metallic plating. The Mthyah Preservation Society website had been down for weeks, and they weren't sure how, if at all, their reports and samples had been processed during previous migratory guest anomalies.

Envelope stuffing had allowed their conversation to drift.

Gee, you know I ran into Lourdi Spires the other day in Career Center, and it's like sometimes there's a limit before you just have to let these holier-than-thou types know that they could really go ahead and act more Christian!

Well there's remember Hoolie? Maintenance? Went around acting just like Christ and wasn't afraid to tell you so. What a dirty freak. Heretic. Stank.

God you know he could have been a shooter. Good thing that cancer he had got him off our campus at least.
by cap'm at 2:56 AM 0 comments

Then they did the torture where they spin you around very fast in an office chair-like contraption, then stop you suddenly and spin you even faster the other way. How can I be so important? she murmured, bloody spittle strung across her cheeks and hair. Then she realized: she wasn't that important at all. The torture was completely automated. This was sort of like a car wash whereas before it would have taken an entire team of ensemble actors. Soon it would spit her out on a lawn behind a post office or a school. Not soon enough... she was going to faint... not soon...

What? What was that? A tiny package, a vial... by her foot. She thought she had hallucinated it, but no. It had come rolling across the floor and under--into--mother's shoe. No-Shiv. The red box.

Tom and Sylvia stood holding one another in the parking lot.
by cap'm at 10:45 PM 0 comments 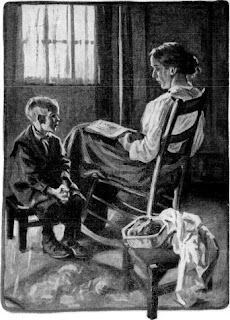 Just to be good—
This is enough—enough!
O we who find sin's billows wild and rough,
Do we not feel how more than any gold
Would be the blameless life we led of old
While yet our lips knew but a mother's kiss?
Ah! though we miss
All else but this,
To be good is enough!

It is enough—
Enough—just to be good!
To lift our hearts where they are understood;
To let the thirst for worldly power and place
Go unappeased; to smile back in God's face
With the glad lips our mothers used to kiss.
Ah! though we miss
All else but this,
To be good is enough! 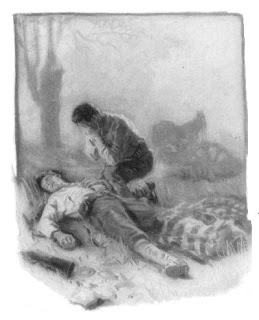 Mum's pleated wool skirt was soft and absorbent. Her thighs were not so bony as to be scary or uncomfortable against the cheek, and not so big as to be mottled or odorous. Her knees were a wholesome cushion of responsive and supporting tension, a blood-water-fat balance that seemed custom made for Peggy's face. She cried and cried.

If you could step back from that scene, you would see the projector above the door behind Peggy and that her mother's image was a hologram.
by cap'm at 8:52 PM 0 comments

Fuck you. Get out of my face.

That's your attitude. But we have taken control of your will chemically. You will answer our questions with the utmost sincerity.

Peggy Smith, why do your parents anger you so?

My parents anger me so, asshole, because they disrespected my intelligence enough to give me nothing to get by in life with except some shitty fairy tale about a volcano goddess. So fuck off.

We know that you'd like nothing more than to put your head in your mother's lap and weep.

FUCK YOU FUCK YOU!! SUCK MY DICK!!

So we've asked your mother to come in.

Your mother is waiting in the next cavern. You may proceed through the hanging beads to your left.

In Search of a Paradigm

If they were all the same price, what did it matter?

Tom and Sylvia sat in the waiting room at Pharm-Supply browsing through old catalogues. Way beyond lipsticks, the most curious pages were the symptom and scripting breakdowns for the shivtropics. Their real reason was to see about breaking Peggy out or smuggling a box of No-Shiv in to her.

CLXXIV. Blyway
Neurodigm. You have many interests which you focus on intensely. You are never happy because you are never satisfied with what you are focused on or else why would you be so focused on it. And why focus on anything anyway. In the big picture, you are a rat sniffing from flower to flower for no reason. Are you a victim of neurodigm?

XXVIII. Same-E
Hopinaskipina. Everything seems fine until all the sudden you have to break your healthy rthyum and engage in uncharacteristic behavior. Consequences include loss of productivity and increased stress factor for coworshippers. Signs of disease-specific denial: "had to let my hair down," "just needed to get away," "fuck you; get out of my face." Ask your shiv priest about your doctor. Then, stop your hopinaskipina.

CC. Rock o' Mthyuh
Blight. Something in the air. You're not the only one who's being affected. But not everyone has the nut to do something about it. You stay right in the head because you owe it to your family, for the safety of whom you are like a lioness. You take your Pro-Labique Pharmashiv whenever and wherever you need it: for protection, for peace of mind. You are not a sick one trying to get well; you are a potentially deadly protector of children. Keep taking Pro-Labique. Don't let them down ever again. If you do, do you really deserve to live?
by cap'm at 5:05 PM 0 comments

The most likely explanation seems that by jumping, the bean will move itself into a safe place where the larva can relax, pupate and undergo the miracle of metamorphosis ready to continue the life cycle.

Please remember to kill and/or capture and report any new, mutated, or previously extinct species to the Mthyuh Guardian Society, especially if aggressive. 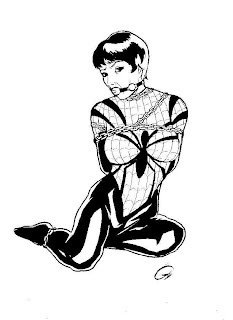 i, an ex-pro ball player,
slump in my plush armchair.

velvet flock on the mouldings
and blue wallpaper. i'm feel-

ing under-plussed now i got
no trade power nor value

it's all overtime now on
a pitiless avenue

and a sorry ride home, too
and except to me, I may

as well be an ohio-
an from hawa-ii-ki-ki.